You’ve seen them, DJs streaming on twitch, Facebook and Instagram Live. “Ain’t No More Room” by The Kittens inevitably features in the set. The hearts and likes and comments float in as people sit in their living rooms, probably snapping their fingers to the beat, maybe, just maybe dancing along.

The “Soul Night” is performing its own wake.

It had long been on life support for the past 5 years, now it’s in hospice after 6 months of people not being able to gather in public in crowded dive bars across the Western World.

This should be okay.
This is actually great.

The gatekeepers of Vinyl snobbery profit and jockey for positions of power. Most often they’re white, heterosexual men of class privilege, exchanging, placing value and critique on art neither of their community or production. They may have found their way to Vinyl, and soul vinyl in particular, through backdoors and the roots of so-called white music forms, punk in particular, in Black R&B. They didn’t grow from first hand appreciation of the art that may come from your aunt, or parents having that *one song,* that artist that makes them wax poetically. There wasn’t childhood conversations informed by even earlier childhood conversations, passing names and tunes of reverence down from generation to generation. If they’re lucky, they might have caught a couple of episodes of Soul Train in their youth. 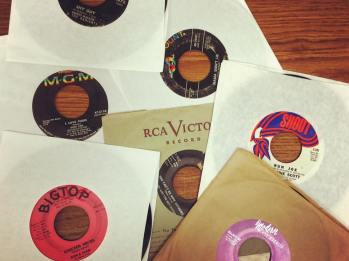 Vinyl love is still an overwhelming white art of consuming culture produced by minorities. There’s some pepper in the salt, but groups of white women and queers being the bulk of diversity really ain’t “diversity & inclusion” when most often they are attempting to arm wrestle with straight white dudes for control over art they didn’t produce.

Soul Vinyl collection is made worse, considering the literal thousands of voices that recorded their voices and their ways with instruments that never got paid for that work. Or paid unfairly. It’s pretty gross to trade $5,000 records when none of that benefits the artist who created it if they’re lucky to still be alive. If not, there should be reparations paid to their descendants.

The whole aesthetic built around Soul Nights in the last 25 years has been notoriously white and heterosexual. Queers aren’t exempt either, with a legendary Soul party in San Francisco using Black cookout aesthetics, down to literally stationing Black folks at the grille while rarely featuring Black guest talent. The party was a successful way for one of the white founders to parlay themselves into local institutions and politics, inserting campaigning for local races in between their sets. All the while, the “value” placed upon music of Black people made it nearly impossible for Black people to access their own history.

The gate keeping of “Vinyl Only” redlined Black folks from their own history, A history fought for with some of the biggest and brightest names we know from our past dodging bullets and bombing. The absurd prices placed on the “rare and desirable” made it impossible to access old records for those looking for them and attractive to get rid of them for those that needed a quick buck to forestall being gentrified out of their homes or dealing with stagnant wages and increasing bills. It divorced the community that created the art from having control over the narrative, being able to tell the stories. It’s yet another way that Black art in particular, but art of people of color has been stolen, colonized.

You may ask me why now. Why would I say anything now. I participated so why should I be complaining or cackling over a grave?

I was a token picked out by many a white DJ to be a guest at their parties. I tried (and failed) 3 times to establish nights on my own in Oakland and Portland in less than ideal venues and time slots.

My criticism is bolstered by critique of the community built around “Vintage” and mid-Century nostalgia. In the candy colored romanticism that we look at the “better” attributes of Post War America and the wealth of creativity, we often ignore the ugly truths of the era. More disgusting is how we still embody values harmful from that time in our current lives. We forget that this era created music under explicit segregation, lack of opportunities and mobility, when queer folks lived in the shadows, and it was pretty normal to demand sex of your spouse and commit physical violence against them if they didn’t comply. “He Hit Me (And It Felt Like A Kiss)” by The Crystals didn’t come out of nowhere.

The Soul Night community, globally has a long list of people that have been sexually assaulted, and many many people, particular CIS white men, that are protected from accountability due to their clout on the scene. Frankly I’ve heard too many in this lane to list. I don’t want to re-traumatize the survivors I know by listing and having the conversation be open for debate.

There’s plenty of times that white people have prevented or isolated people of color from opportunities to participate or garner support for their own events. Most nightlife venues are owned by white people only interested in bringing in a buck. So the celebrities in the field grab all the opportunities anyhow, completing the circle of white supremacy being built on Black art virtually no different from white record label owners bilking performers out of royalties and managers taking absurd cuts off of performance fees. I’ve lived all of those dynamics, it’s exhausting. It’s frankly a relief to see them have a natural death.

I write this looking at the vinyl collection I spent thousands on and have spun for audiences up and down the West Coast of the US. With a 55 year old Chevrolet parked outside my apartment, with a growing collection of film cameras. I participated, and to an extent, doing podcast episodes 10 years after I started posting Mp3’s a day on Tumblr, I’m still participating. I can’t help what I love, but it would be foolish of me to love all of these vintage things without a critical lens. They all have the power to continue shaping the world around us, and I hope that my contribution is that they’re offering the best of their history rather than the worst.

My lens has always been reclamation. I grew up with KDIA and my ancestors record collection filling my ears and my heart some 4 decades ago. Hopefully, when one virus subsides, the virus of culture vultures grabbing an art that never authentically belonged to them will come to an end. When there’s a rebirth, when, if we’re able to congregate in spaces again, all of the harm, trauma and centering white people in Black and Brown art not be present.

In the meantime, some of y’all that make money off of your expensive vinyl collections that *aren’t Black* really need to consider donating resources to individuals and organizations that support Black Trans Women.

Y’all can’t be all yes Jackie Shane was so revolutionary yet not support the women actually alive today that are her descendants.