In general, the creators of popular music rarely get the credit that they deserve. Although we all have dozens of tunes that we (un)controllably hum in our heads due to the genius of composers forever having something memorable tunewise to offer, we oft deride such content as fluff. When you’re one of the rare women that’s been someone that’s contributed to crafting tastes, you pretty much hang out in the shadows, few recognizing your existence or importance. 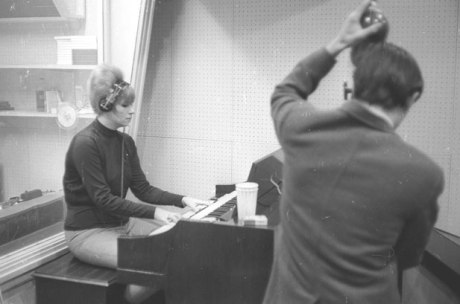 I started this series of mixes with Sylvia Moy. As we slide into the season we’re thankful for, I look east to Long Island and call in Eleanor Louise “Ellie” Greenwich. She should ring a bell, given that she was in a cadre of Jewish Middle Class Long Island female songwriters, a few cubicles over from Carole King and Cynthia Weil. Although like those two women, Ellie did work with eventual husband Jeff Barry in terms of a host of her compositions, she often worked independently, or with others, in a number of stages of the recording process. Between playing, doing demos, producing and songwriting her efforts holistically are perhaps the most diverse and omnipresent out of the three women.

Where her legacy may have struggled is with no huge hits of her own attached to her own name and face. Her biggest chart efforts as a singer/songwriter went to her made up group The Raindrops during 1963. Those efforts, which were Ellie multi-tracked with Jeff providing Orlons-like feedback on the singles, were promoted by teams of demo singers like Beverly Warren or Ellie’s own sister Laura lip syncing, since Greenwich was too busy and in demand cranking out huge hits like “Be My Baby” and “Then He Kissed Me” for other artists.

Although she released a few LPs under her name, none of them caught the attention or fire in the way that Tapestry did for Carole King. So like Sylvia Moy, we honor the diversity of material, oft derided as simple teenage fluff, that Ellie Greenwich composed for more than a decade. Of course, some of the efforts are painfully dated, as a number of our songs of times past come to be as we question what we hold dear.

With that, sit back for 35 tunes from the Queen Bee of the Brill. I’m sure you’ll be thrilled.