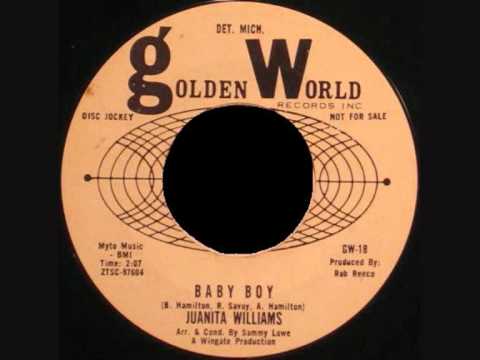 Okay, another one of my favorites, really a crowning jewel in perhaps my favorite sub-genre of Soul Music. Like with Kim’s offering a few days ago, I won’t tell you what position Juanita Williams’s debut single on Golden World occupies, but trust me my eyes light up, my feet get to moving, and there’s pure joy every time it’s played. Given it debuted in September of ’64, it seemed the perfect day to dust it off for some glory.

To ones ears, you should recognize the sub-genre as “Distaff Mary Wells” post “My Guy.” In fact, “Baby Boy” out of all the singles within this sub-genre hews closest to the formula while turning up the late Summer heat. Like “My Guy” its an ode to the wonderful average dude, but given a decidedly more fierce Detroit Stomp. Clocking in at 2 minutes and 11 seconds, it bursts at the seams with overjoyed strings courtesy of the Detroit Symphony Orchestra.

In terms of success, it fell far behind rival effort “Selfish One” by Jackie Ross. The more laid back effort from Chicago shot into the R&B Top 5 and Pop Top 20, meanwhile, Juanita’s cha-cha-charming debut single only became a regional sensation (albeit beloved enough to garner a cover by Ja-Neen Henry 18 months later). It is kind of remarkable for such a big budget effort to not garner any success, but it proved to be one of only 2 releases by Williams at Golden World. Of course, this type of beautiful bombast is what Northern Soul Aficionados eat alive, so good luck finding a 45 rpm copy of it under $30 nowadays.