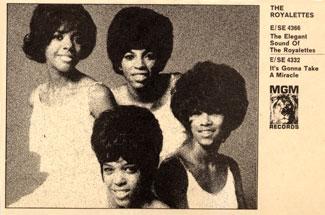 Here we find ourselves at the “end” of Summer in the United States. Technically on the calendar we have about 2 weeks to go before Summer Solstice gives way to the Autumnal Equinox, but as we busy ourselves with year end closings, shouldn’t it be high time to find a song that expresses the beauty of those long days and the transitions to another season?

Here we have the last single Teddy Randazzo produced for his second pet group, The Royalettes. After all of the A-sides that had been lifted from the minor masterpiece The Elegant Sounds of The Royalettes had not charted, one last ditch attempt to bring Sheila Ross and her family & friends in sync with girl-group and soul trends was made by the handsome Italian producer that was more versed in building the bridges between post-doo-wop, Uptown Soul and operatic influence.

The result more or less came out like “Teddy Randazzo produces a Martha & The Vandellas dance hit.” Which, well, isn’t bad at all. However to listeners ears it sounds like he might have been aiming for the bombast of “Wild One/Nowhere To Run” era Vandellas with this brassy finish at the production helm. Add in a very very independent “Sex and the Single Girl” lyric about not getting too emotionally attached to a summer tryst, and the Vandellas comparisons keep coming.

Of course, as with the majority of The Royalettes output, even with this course change, there wasn’t much that could be done to reverse their commerical slide. Their final MGM single, coming out barely 2 months after Summer left (and this single went nowhere) they found themselves under the stewardship of Bill Medley of The Righteous Brothers. It’s a tad surprising to listen to that final single for MGM, and listen to how how Medley himself married the style of Randazzo to some very Spectorian “Wall of Sound” gimmicks.