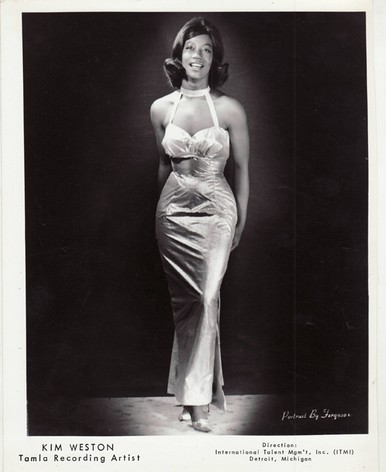 DJ Larsupreme has favorite songs, and one that often bats for the #1 slot was introduced to the Public 50 years ago today. You take the magic that is Kim Weston’s voice, able to leap scales like Wonder Woman, you take a backing track and song that had been floating around Motown since September of 1964 and assigned to Martha & The Vandellas and you get one of the most oft covered shadow classics in the Motown catalog.

Nothing really beats the first official release of it in my book, although, curiosity is stoked if there still is a Martha & The Vandellas version lurking in the Motown vaults a half century later.

To me, it’s the absolute perfection of Motown during their golden period: Take an uptempo, thoroughly gospel twinged backing track, add in the heady mix of passion, love and heartbreak, then give the script to someone well versed in the art of testifying. The mix is an bittersweet late summer juxtaposition of getting that one last warm hug (or orgasm, older I’ve gotten, more I’ve heard this song as a break-up sex anthem) before you part ways into the actual cold of not being coupled with someone. The fiery uptempo bent of the original brings up a marvelous dichotomy: Perhaps if this is quick and dirty it’ll hurt less; perhaps if it’s more intense maybe that’ll rekindle the fire.

As known, Kim Weston did two takes, the more “vinegar” bite of the single take and a spicier take that didn’t see single release. So many ways to skin the cat of heartbreak, and devoid of an LP that might have given us the alternate take somewhere, we waited 40 years to hear the alternate version.

No matter which version you choose, it was the Top 5 R&B triumph Kim had worked nearly 3 years to score at Motown Records. Although I’ve always wondered, despite TV appearances, why it stalled at #50 pop. Perhaps to emotionally intense for mainstream (White) audiences. Kim Weston, long in my holy trinity of female solo soul singers, deserved much more, and gave us the searing sequel, “Helpless” 5 months later. Given that Motown did give singers story trajectories on singles, I’d love to think of where Kim would have found love again had she not moved on to MGM at the end of 1966.

Happy 50th Birthday “Take Me In Your Arms.” You’ve long schooled me about the varieties of emotions that come up with loss.