If there’s ever someone that’s been more “20 Feet From Stardom” than Darlene Love, It has to be 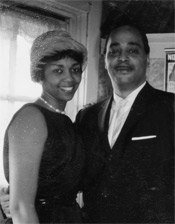 She’s been performing in gospel and secular capacities for more than 75 years. She however didn’t make the leap into a secular path until she was nearly 30 years old, following the path of her nieces Dionne and Dee Dee into Brill Building Session work. Eventually she started stepping out into lead vocalist capacities on one off singles in 1964, and by the age of 33 was releasing solo singles under variations of her stage name.

Between motherhood and session singing for countless artists, there was little time in the late 60’s for a solo path. However, her iteration of the family session singing group, The Sweet Inspirations, brought her notoriety and a Top 20 Pop hit in 1968.

There is the uncanny ability to see where her daughter Whitney got her vocal training from. Both women share a remarkably similar tone of voice filled with warmth and vibrancy, albeit Mother Cissy having a higher Soprano that has a blinding capacity at times. Able to slay building ballads and freakbeat dance numbers, it’s wonderful to see how a family of singers have been integral parts of R&B in the post-war era.

For some singers a ballad like “World Of Broken Hearts” would be a remarkable challenge. For Cissy Houston, the ability to go from introspective whisper to harrowing scream seems like a cake walk. Thankfully there’s plenty of examples of her vocal supremacy out there, just ripe for discovery.