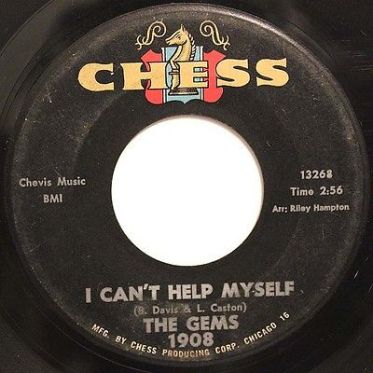 I mentioned yesterday that there was a plethora of girl groups that served behind your favorite regional hits of the 1960s. 20 Feet From Stardom went a long way to ignore those who worked in a primarily African American milieu, however.

What you might have not know was that they quite often recorded their own unique material. In that same thread, they were often the incubators for much beloved talent in the years to come.

The Gems story starts with Chess records around 1962 when Jessica Collins(lead), Verdine Harrison, Theresa Washburn, Dorothy Hucklebee, and Bertha Watts joined Chess records as The Lovettes. Minnie Riperton would come in to replace Verdine in 1963 as they were re-christened The Gems. Between their own singles, they can be found prominently on a number of Chess recordings by Etta James, Billy Stewart, Jackie Ross and Fontella Bass.

All of their outings on their own are fine, exceptionally well crafted pieces of Chicago Candy Soul-Pop that deserved a bigger audience than their efforts found in initial release (and to an extent are still undervalued today). This rather brooding delight about coveting someone else’s man was the closest the group got to a hit record, as it started landing on playlists outside of Chicago and got them on the road to promote their efforts. This and their equally genius flip deserved so much more, but soon members of the group, Riperton in particular, were off to bigger and better things as the 60’s marched on.