Calling out around the world, we have one helluva birthday to celebrate. She’s perhaps that singular and that collective all in one. In a lot of ways, she’s always and always will be “Miss Motown.” We’re talking Martha Rose Reeves. She turns 75 years old this July 18th.

Her efforts for Motown and beyond have brightened many a day with frank discussions of all forms of joy, although we can’t discount the ways she’s dealt with heavier issues in our conscious minds through her recording career over the years. Her catalog with the Vandellas covers a decade, almost in the same way with less rose-tinted glasses about everyday humanity that the beloved drama Mad Men did for us recently.

More than any other Motown Act, she, Rosalind Ashford, Annette Beard, Betty Kelly, her sister Lois and Sandra Tilley provide us with the best audio record of what it was to be Black and Female throughout the 1960’s into the 1970’s. Her years beyond the march of the Motown sound on record and in performance have proven to many eyes what it takes to be a Soul Survivor. We’re rapidly approaching Martha being in show business for 60 years, and she shows absolutely no signs of slowing down. She time and time again proves to us how music is vital to our existence.

Born in Alabama, 3rd of 11 children, like many in the Great Migration diaspora, Reeves and her family found joy in the church and song and voice as a daily ritual. In the burble of relative affluence and community connection in Detroit of the 1950’s, the naturally talented Reeves, already possessing that clarion call of an Alto to put people on notice seemed to have a future destined for uplifting herself and others via notes of the throat. Thanks to Detroit Public Schools at the time having well funded arts programs, Martha got professional coaching on how to mature her talent from one Abraham Silver, who also worked with fellow Cancer Call and Response Queen Florence Ballard.

The poise, grace and nuance she learned then carried her into days as a Jazz Singer in nightclubs around Detroit as Martha LaVaille as the decade turned from 1959 to 1960, and drew her within the orbit of her future singing partners at the same time. As recollection is fuzzy 55 or so years later, Reeves was associated with the future Fascinations as well during this period apparently. But the spark that went off between her, the Contralto of Annette Beard and the bell like Soprano of Rosalind Ashford was too sweet a brew to ignore. By 1962, they were stealing enough attention behind Marvin Gaye on his stubborn kinda efforts to become the new prince of R&B that they were given the spotlight of their own. 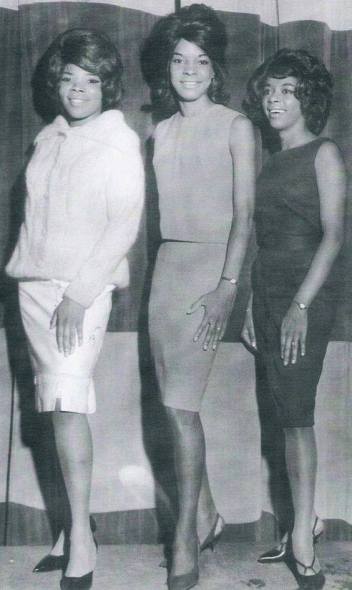 What unfurled next was one of many of Motown’s memorable yarns about rags to riches Urban New Black of the ’60s success stories. Between the months longs trudge of The Marvelettes plugging “Please Mr. Postman” to the top of the charts in 1961, and The Supremes run of 5 #1’s at the height of the Uranus Pluto Conjunction in Virgo in 1965, we have Martha and The Vandellas setting a more mature template for Urban Black Women to grow into with their barrage of hits with a year between March of 1963 and March of 1964.

From the independent and confidence of “Come And Get These Memories” we have the bed of passions unfurled in “Heatwave” the obsessions that follow in “Quicksand” the questions about such decisions those obsessions bring in “Live Wire” and then, in resolution, the processing of the emotional turmoil by the time we reach “In My Lonely Room.” We often discount the last two efforts in this first, of vinyl soap-opera arcs Motown became legendary for, but here we have the first display of Motown making episodic television on vinyl.

Martha and the Vandellas, although they received a Grammy nomination for “Heatwave” deserved 1) the first mini-series based on a series of records and 2) more cultural recognition for documentation and representation of a full story arc through their hit single releases. This pattern set up listeners in a profound desire to hear what was next with their favorite friends on vinyl. What’s the latest story, will there be new gossip? Although the Vandellas wouldn’t return to this format, as first original member Beard departed in the reality of marriage and family, we’re thankful that this “concept” of singles releasing, and the peerless performance that it encapsulates, inspired concept albums that told stories like novels in popular music. 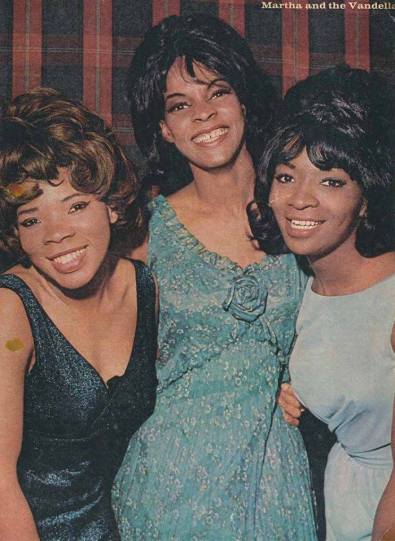 Meanwhile, as Betty Kelly came on board, we have Martha Reeves calling out for peace through the love of dance with their biggest selling record of all time. “Dancing In The Street” dominated the later Summer and Early Fall of ’64 at the same time there was a struggle for the crown of Queen of Motown. Although it’s possibly the best known #2 Pop hit in music history, it still calls out, like the mothership of unity it really wants to be. Mildly political, with a hint of indigence from Martha (because, in her account, the killer first take didn’t get recorded) the shout out to inner cities where Black Lives started to matter a little less due to “Urban Renewal” (or negro removal) as the Mid 60’s really started to light a match still reminds us to come together in joy, and not separation. At some base level, all we need is music, sweet music, especially in these times of despair.

As 1964 turned into 1965, We see Martha, Rosalind and Betty at the forefront of the Motown sound, taking risks that didn’t always give them the biggest hit records, but would end up benefiting their labelmates as cues and clues of what actually clicked with audiences filtered down from their records to other cash cows 6 months later. The persistent rush of “Wild One” wouldn’t be matched in energy by The Supremes until mid ’65 with “Back In My Arms Again” and “Nothing But Heartaches.”

Diana Ross wouldn’t be tortured with glee in with the heady mix and claustrophobia of “Nowhere To Run” until Motown had the courage to finally release “Love Is Like An Itching In My Heart” until 1966. By all accounts, The Supremes never gave advice to their peer sisters in the way “You’ve Been In Love Too Long” continued to rack up Martha’s Feminist cred, nor did The Supremes have an unabashed fancy free slow dance hit in the form of the absolutely giddy “My Baby Loves Me.”

Here’s where the critical slight has always gone with Martha Reeves being more actual Motown than Diana Ross. Because The Vandellas didn’t carry the burden of crossover success in the wake of the meteoric rise of The Supremes (albeit Martha, Rosalind and Betty were fully capable) they were allowed to be more authentic, more “real” and less respectable on vinyl and off. Martha and the Vandellas were allowed to be fun and, for a lack of better way of putting it, unapologetically Black in a way that Black Lives Matters calls for all of us to be 50 years later.

The interesting thing is the reality that, in actuality, Motown records was both. Berry Gordy was (and probably still is) someone that wholeheartedly believes in the power of capitalism, and a number of his choices show that pragmatism towards increasing the bottom line. Motown was unapologetically Black in wanting to get as much of the spoils of captialism to build a Black Empire as possible. This often meant that many lives, hopes, dreams and goals were sacrificed at the altar of the almighty dollar. For all the hit singles for Reeves and company I mentioned above, there’s 3 times as much released output by The Supremes, who by 1966, had their own line of White Bread.

The underlying reality is that there’s an alternate universe of Martha & The Vandellas at their recording peak that continually has been excavated from the vaults ever since. Between their LPs Dance Party (April, 1965) and Watchout!(November, 1966) there’s nearly 25 distinct efforts (if not more) that sat collecting dust as potential hit singles and album tracks, most equally ferocious as what we ended up hearing from the group. From the stomp of “Can’t Break The Habit” to the beauty of “You’ve Been On My Mind” to the proto-funk of “I Can’t Help It I Love You” the legacy of Martha at her most golden goes far beyond what we already know and cherish repeatedly.

Nonetheless, as they drifted out of the main spotlight, and oft got remolded in the image of The Supremes, they still racked up memorable moments. Martha loves to sing about love and she absolutely shines still on “I’m Ready For Love,” and “Jimmy Mack” held far more weight when released against Johnson-Vietnam era America than it would have when it was recorded back in June of ’64.

We find roots in Country Soul from “Love Bug Leave My Heart Alone” all the way through “Sweet Darlin” referencing Georgia Pines in a way that sends Martha off on her own again, redefining what it could possibly mean to be Motown.

Rare was it for the label to acknowledge its Southern Roots in this way, especially as it tried to maintain a definition from Aretha, Stax and Dusty in Memphis. Martha, now with sister Lois helping keep the storytelling going, again, makes the Motown unapologetically Black in a way that could only be matched by southern import labelmate Gladys Knight was doing to slightly more success during this era.

Martha’s self acknowledged personally difficulties and prescription drug usage definitely downshifted the ability for the Vandellas to continue at full steam ahead. In actuality it would take another decade for her to deal with her addiction issues. But the trauma of being an artist, once supported, now cast aside for the pursuit of cash, is a traumatizing one that can’t be cast aside. Reeves the survivor comes out again, as Rosalind Ashford finally parted ways with the group in 1969. The Velvelettes, forever a pool of underutilized talent brought Martha her beloved final incarnation of the group with Sandra Tilley.

Although the major hits all but dried up, alongside label support as Motown started to divorce itself from its Detroit roots and go out to the Mirage-Oasis of Los Angeles, Martha, Lil’ Sis Lois and Sandra made valiant attempts to keep the Black Magic going. From the direct politics of “I Should Be Proud” to the younger, hip love ode of “Bless You” we see them neglected but loved, Reeves is still internationally renown for this particular power. She would use it to carry herself to a belated Solo Career in her early 30’s. She’d use this wattage to become the defacto consistent representation of Motown, or Detroit as Motown itself with her City Council Seat years last decade.

In a way, Martha Reeves is the purest expression of Great Migration Black Excellence. Without the way she’s connected song and soul, country and city, call and response for the better part of 60 years, we wouldn’t have a cultural centerpiece of Black femme experience, in all of its diversity.

We go hard in celebrating her into her 75th year.