Jazz Singer Pat Thomas found herself in an interesting predicament. Having trotted onto the scene in 1961, she managed to score the one of highest  charting versions of ” “Desafinado (Slightly Out Of Tune)” the next year. Her relative youth, beauty and poise made her seem a more likely candidate to cross over out of the bounds of Jazz into R&B, Pop or Soul. Her one chart entry proved to be a bit of a surprise for Verve Records. Before embarking down a different path, she was unleashed on a series of Latin Jazz interpretations for a year. 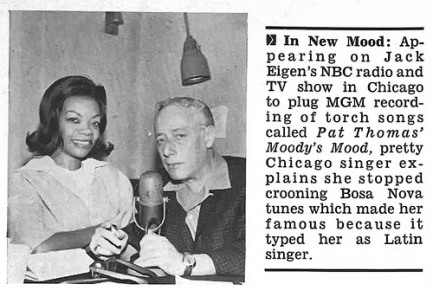 It comes as no surprise that her catalog has moments of Girl Group and outright uptown soul to benefit her position once that direction was exhausted. Warm and foggy voiced, you can think of her as another Nancy Wilson, without the chart success, with perhaps a little bit of Baby Washington blended in for good measure. I say that because both Pat and Baby released competing versions of “I Can’t Wait Until I See My Baby’s Face” as 1963 turned into 1964. While Baby’s version stood out as rather distinctive, Pat’s effort decidedly pitched her as the next Dionne Warwick, even incorporating some fairly usual Bacharach-David flourishes on top of the the Jerry Ragavoy penned brilliance that more clearly shines on Baby’s version (and all the cover versions that adhere closer to her charting version).

The real gem was the time-keeper’s b-side. Using a guitar figure that imitates the sounding of hourly alarms, it sets up a foreshadowing tension that remains clever yet anxiety raising as the song builds on a groove powered by piano and strings more familiar to Pat’s previous output. Had it been the topside, it may have given Pat her second chart effort, but Verve couldn’t be bothered pushing either side, and they came and went without establishing Pat as the premium performer she so deserved to be.