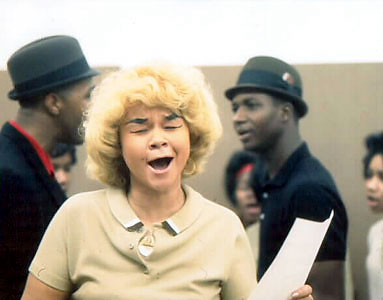 I’ll say, one of my biggest regrets of my concert going life was not seeing Etta James perform live before she succumbed to Leukemia 4 years ago. There’s many soul singers so omnipresent in the crafting of the adult I’ve become as my life spins its LP year (I hate Christ Year, and 33 & a third seems so much more cool).

World weary, street smart and sophisticated before adulthood truly took grip of her, rebel that colored far outside the lines, she’s my David Bowie. She showed me that on a number of levels that it takes someone quite tough to make it as an outsider in this world. Your best support system is to gather round you a band of freaks and geeks that understand you and your oddities as much as you understand theirs.

A purely Californian Concoction full of Los Angeles sun and San Francisco foggy mysticism, she always rang a bit closer to home than the more glamorous women I also idolized from outside my home state. Nevermind the fact that her Camelot era renaissance at Chess Records was bathed in the diamonds that are Riley C. Hampton strings befitting or betraying their heritage as Second City artifacts of the Urban New Negro. Though possibly, worrisomely close at times to the Tragic Mulatto stereotype come to life (and given such baggage by quite a few Rock & Roll historians), her determination to work on her own shit and survive inspires me to breakdown, start over and do it a little stronger each day.

It’s 61 years on from the precocious 17 year old Etta James topping the R&B charts with “The Wallflower” and learned the lessons of cultural appropriation long before that term got batted across the internet like a tennis ball thanks to Georgia Gibbs and her Pop Chart topping cover. The former Jamesetta Hawkins didn’t have the most halting voice. Her voice at the beginning, surprisingly was more what we’d expect from 60’s vocal ingenues she influenced, from Mary Wells, Shirley Owens and even to an extent, Diana Ross. That is to say, although she was able to light up the proceedings with grunts and growls, it was by no mistake that she came into her commercial own, again, bathed in strings closer to a later day Dinah Washington rather than Big Mama Thornton.

Despite the lack of huge crossover Pop hits, at her essence, she was a popular singer of the best kind. Never afraid to show her true emotions in her performances, like fellow Aquarian Sam Cooke, she was the female, often feminist voice of the New Urban Negro. Songs like “Tough Mary” gave permission to her little sisters on Vinyl like Gladys Horton of The Marvelettes to follow suit and list their demands as they navigated life in concrete jungles far and wide. Romanticism and realism walked through the park hand and hand in her material.

In the heart of the country, in Chicago, she dug depths of material from sources far and wide, blurring the boundaries of time. She was Motown before Motown had a queen, helping finance Berry Gordy’s ambitions with her stunning read of “All I Could Was Cry.” She gave Dionne Warwick the template to incite the proper balance of rage and regal in her read of Burt Bacharach’s “Waiting For Charlie To Come Home.” She made the drudgery of being working class radiate with enough wattage to power Chicago’s south side with “Seven Day Fool.” And we’ve really just arrived at 1962. Of course, she kicked off the year with a celebration of lust, because why not? Of course, the coded read for being horny that “Something’s Got A Hold On Me” is gave permission for Martha & The Vandellas to fan the flames 18 months later on “Heatwave.” 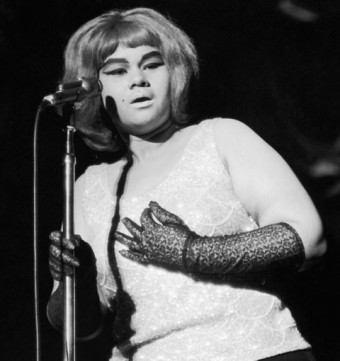 You see, I tell you, Etta James was the bleached blonde over-the-top fairy godmother of the music that I’ve always loved. She opened the doors and played den mother (often literally) for a host of women of R&B to knowingly and unknowingly following in her footsteps. She’s the bridge between the Ella Fitzgeralds, Big Mama Thorntons and Carmen McRae’s to the Minnie Riperton’s of the world that played yeomen duties behind her on overlooked at the time but much beloved today songs like 1964’s “Mellow Fellow.” Even as her commercial fortunes fell at the height of the 1960’s, and her battles with addiction tore away at her ability to promote her latest and greatest, she still turned in brilliant gems that we’re lucky to find in jewel boxes and vaults today, like the slightly too close to home exuberance of “Can’t Shake It.”

She found support and comfort with other outcasts mid decade, be that best Gay Friends, local Trans women and Drag Queens or old friend Sugar Pie DeSanto; re-upping the desire to not take an ounce of shit from no one on “Do I Make Myself Clear?” These two didn’t give any Kitties 50 years ago. As subversive in context as many a proto-Civil Rights Anthem, it’s yet another weapon in her burgeoning self preservation arsenal. Of course, as time moved on to the second part of the 1960’s, she’d need it.

You’ll note that I’ve staying away from her most worn out chestnuts, and I want you to understand that there’s something to read from Etta. The gem in question is the nuance of everyday experience. You can’t paint the whole picture from two polarities, especially when those have 7 years in between them. As she slid deeper into depression and delinquency as the decade came to a close, we saw her 3rd commercial revival. However, even in the depths of her demons, she could find the constant glow of finding those special moments we all seek; see her B-side before she returned to the Top 40: Happiness. You can hear tears of joy with that pure vinegar mixed with honey rasp that, at her Saturn Return, she perfected.

She’d find herself in and out of Rehab, Jail and under suscpiscious watchful eyes for the majority of the 70’s, and found herself back in Gay Clubs, putting the pieces of her life back together again by the time I was born in the Early 80’s. In fits of Boomer Nostalgia, her LPs moved to the Cassette tapes of Delco Tapedecks of Family Roadtrips. I was firmly aware of “I Just Want To Make Love To You” long before before a Diet Coke advertisement made me feel a little queer featuring shirtless white dude. I haven’t made love to a White Dude to Etta James yet. Some might say I haven’t quite lived yet.

Etta James is *my* David Bowie, I say again, after seeing Facebook go nuts for a week to start off this year. Etta James taught me to be the beautiful me, and embrace this beautiful world still full of Cadillacs and Mustangs a plenty. She’s still blurring the boundaries of respectability, time, vulnerability and visibility even if she’s not breathing our collective air for the 4th end of January in a row.

I Rage
I Smile
I Sex
I Survive

Based on her example. She’s the one, and only, and best Aquarius. She lives forever, long as I remember to pass her story down to those unlearned.