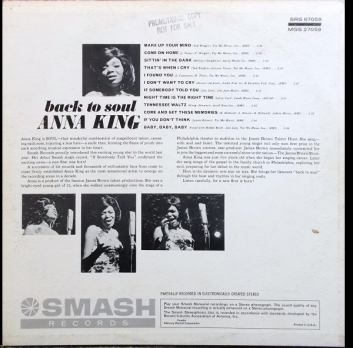 Sometimes all it takes is one LP and a connection to a Soul Legend to solidify your place in R&B History. However, Anna King was much more than her year + affiliation with James Brown and his review. Today we celebrate what would have been the Philly Native’s 78th Birthday.

Like so many Female Soul Singers, Anna started in Gospel, then rose in ranks as a member of a girl group, in this case as one of many members of Zell Sanders’s forever shifting Hearts in the late 50’s. Anna, who stood out too much moved on to recording one off Uptown soul numbers before she hooked up with James Brown for her 1964 Back To Soul LP.

Personally, I find all of her other solo work *around* that LP to be more gratifying. Straddling a line between restrained reason and ultimate wounding over a percolating Luther Dixon arrangement, Anna gets one of her finest workouts on “The Big Change.” Granted lyrically and arrangement-wise it more or less recalls the best work between Dixon and his former protegees The Shirelles, Anna’s extra fiery burn however seals the deal. Unfortunately, nothing further came from this partnership after the single came and went.

Anna would go on to record a shady swansong to Brown once her time in his review was over before singing for Duke Ellington and eventually returning to her Gospel Roots before she passed away. We’re certainly blessed that she took a 7 year detour into the Secular world.