And here we are, at the end of a tumultuous election season. Admittedly, I have to absolutely scrap everything previously that I wrote in the anticipation that we’d be here, November 9th, 2016, heralding our first female president.

We’re not this morning, in fact there’s a number of us mourning in this reckoning, and I’m wondering what old thoughts I’ll be able to salvage from sentiments I felt just yesterday. I’m scrambling, cycling, wounded, fearful, angry, crying, looking for smiles in faces dead during this morning commute.

I had faith in the fact that we collectively love safety and security and that Hillary Clinton would be a slide into home base declared SAFE! Here I am, rather ass out, wondering how much of the redness on my ass is dirt from the field or blood drawn from a freshly opened wound. It’s perhaps a bit of both.

First off, much love and respect to Hillary Rodham Clinton. She deserves the empathy of trying to reverse her own personal and our collective mistakes by holding us in place as a dam against this flood.

Second, it’s interesting that the title I selected for this post/mix is still appropriate. This is a harrowing call to rise up for white women (and white men) and all of us that see ourselves as progressives. In the shadows of our collective shouts and judgments, a silent majority of hate that believes first and foremost in the preservation of patriarchal whiteness at the detriment OF THE WHOLE FUCKING GLOBE centered a hustler that was born and will die showing us the absolute worst of the Gemini/Sagittarius polarity as the person to lead us through the next 4 years. It’s a painful reckoning about how we really make each other the “other” throwing metaphorical and physical fists instead of calling in and nurturing. 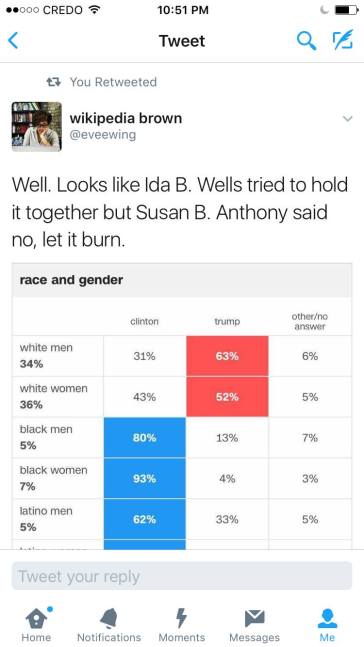 The Becky archetype has to reckon with Darth Susan. The “feel good” has to uncover and wrestle with the poisonous wombs it springs from, both the toxic masculinity that not only white people suffer through, but also the the learned self hatred of the receptive, the nurturing and the power of that within.

It’s a defining lens on the scope of race, as the statistics to the left highlight. There’s a country out there fed on the fears of what the others might do, as the others have suffered the consequences of the American venture longer than it’s been an official union.

I’m owning my fears, owning my tears, grieving what I knew only 24 hours ago as holden truths. I thought only 30, maybe 35 percent of America was this toxic, this vile, and I’m unashamed to say that. The level of sobering that 50% give or take, of this nation is okay with RAPE… Nevermind racism, sexism, misogyny, homophobia, transphobia, on and on on the isms and obia spectrum is something no amount of mind altering substances could overcome.

With that, let’s head back to a variety of white ladies that rode the trends and benefits of being white, while suffering a number of consequences of being women in the industry of show business during the 1960’s. We have the challenges of aging in a cruel business in offerings seeing Doris Day, Rosemary Clooney, Keely Smith and Connie Haines trying to stay relevant to an ever fracturing recording market, we have other women full-fledged indulging in R&B romps that are either direct copies or splendid facsimiles of what women of color recorded. And of course, we have women like Carole King and Ellie Greenwich who did the dynamic dance of writing some legendary material for a vast community of performers while trying to balance relationships, self determination and artistic expression all their own.

In that intersectionality we have 32 tunes to swing further through Scorpio Season with, and beyond. Perhaps there’s a history lesson in there if you give a few moments to check out each woman’s story. I hope that this inspires you to continue to dive deep and be actively nuanced in your review of history as we pull forward into the days ahead.

Much love and healing,
DJ Larsupreme