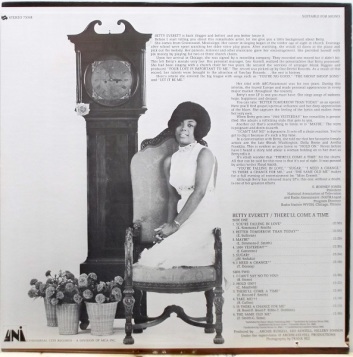 Although she didn’t have more than a handful of huge hits, Betty Everett spent most of her adult life serving up Soul to listeners. We celebrate what would have been her 76th Birthday today with some of her oft-overlooked output from Uni Records.

It had been nearly 5 years since she conquered the Pop Top 10 with her version of “The Shoop Shoop Song.” Through the rest of 1964 and early ’65 she found more chart action being the buoy that bolstered Jerry Butler’s fortunes for Vee Jay records. Often her own solo recordings were released side by side with the duets, damaging either records chances to flourish in the marketplace. This ill-timed strategy was one in a number of bad business decisions that led to Vee-Jay folding in 1966.

Her 2 year stint at ABC brought quite a few gratifying records on artistic merit, but as many an R&B star discovered when they moved to larger, more mainstream record labels, she got lost in the shuffle and garnered little to no promotion while at that label. November of ’68 found her at Uni Records recording what would be her last big comeback. Although the A-side and eventual album get all the notice; Uni didn’t think to spread out the many delights on the LP as well as they could have.

Of note, Betty Everett was one of the earliest female advocates of unabashed funk with the B-side “There’ll Come A Time.” If you’ve been to any of my DJ gigs you know the party isn’t really going until I flip this single over for the freakbeat funk filled to the brim with goodies that is “Take Me.” Give a spin and you’ll appreciate many of the diverse talents that Ms. Betty gave us.