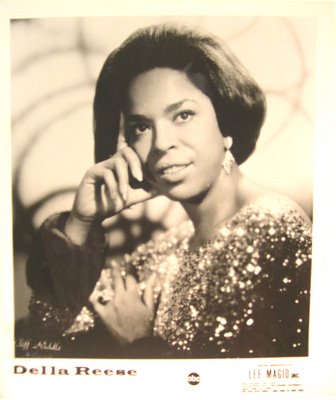 In between the days of Dinah Washington and Dionne Warwick, there spans the remarkable career of Delloreese Early, someone that you definitely know better as Della Reese. In age she’s the perfect generation gap between two transition periods of African American Femme Fatales of song, and today, we celebrate her 84th Birthday.

Like Washington, her catalog is chock full of interpretations of standards and MOR fare that any a number of women that solidified their careers during the 1950’s would have. And like Dinah Washington she birthed her secular career from a rich gospel tradition that she could never quite hide the roots of. There’s nary a performance of hers that isn’t dripping with well timed emotional weight that can be lacking in straightforward pop interpretations of her contemporaries.

She also, given her relative youth during the 1960’s, had more forays into straightforward R&B interpretations. Again, her gospel roots served her extremely well, and carved out another set of astonishingly well rendered efforts.

On her birthday we fast forward to the 2nd decade of her secular recording career. 1966 finds us slowed down to a late summer boil, Della gives an ocean deep interpretation of what, in the hands of Neil Diamond, is nothing more than a ball of machismo fluff. Of course, it rode underneath her immensely sexy take of “It Was A Very Good Year” and it’s really hard to decide which side of the record is the more pleasurable one.

Suffice to say, had ABC had half a brain, they would have split the two performances to two different single releases. Meanwhile, we have one of the best shadow classics of lounge soul. Happy Birthday Della.